Two years ago, DSG ambassador Brittany Jill saw a picture pop up on her Facebook of a friend catfish noodling. She remembers saying at that time, “I’d never do that. She’s crazy.” Two years later, she did it. “It’s a challenge,” DSG ambassador Rachelle Hedrick seconds, “It just depends how crazy you are and how much guts you have.” Fellow ambassador Allison Vogues compares it to "jumping off of a cliff or out of an airplane (and I've done both): you just have to go for it!"

This summer, Allison, Brittany and Rachelle gave noodling a whirl under the guidance of fellow ambassador and noodling veteran Alyssa Schreiber, of Alabama. What is noodling? “Noodling is just like fishing,” Alyssa says, “Except there’s no rod, reel or bait involved…well I guess that means it’s nothing like fishing, but you still catch fish—you just have to do it with your bare hands.” 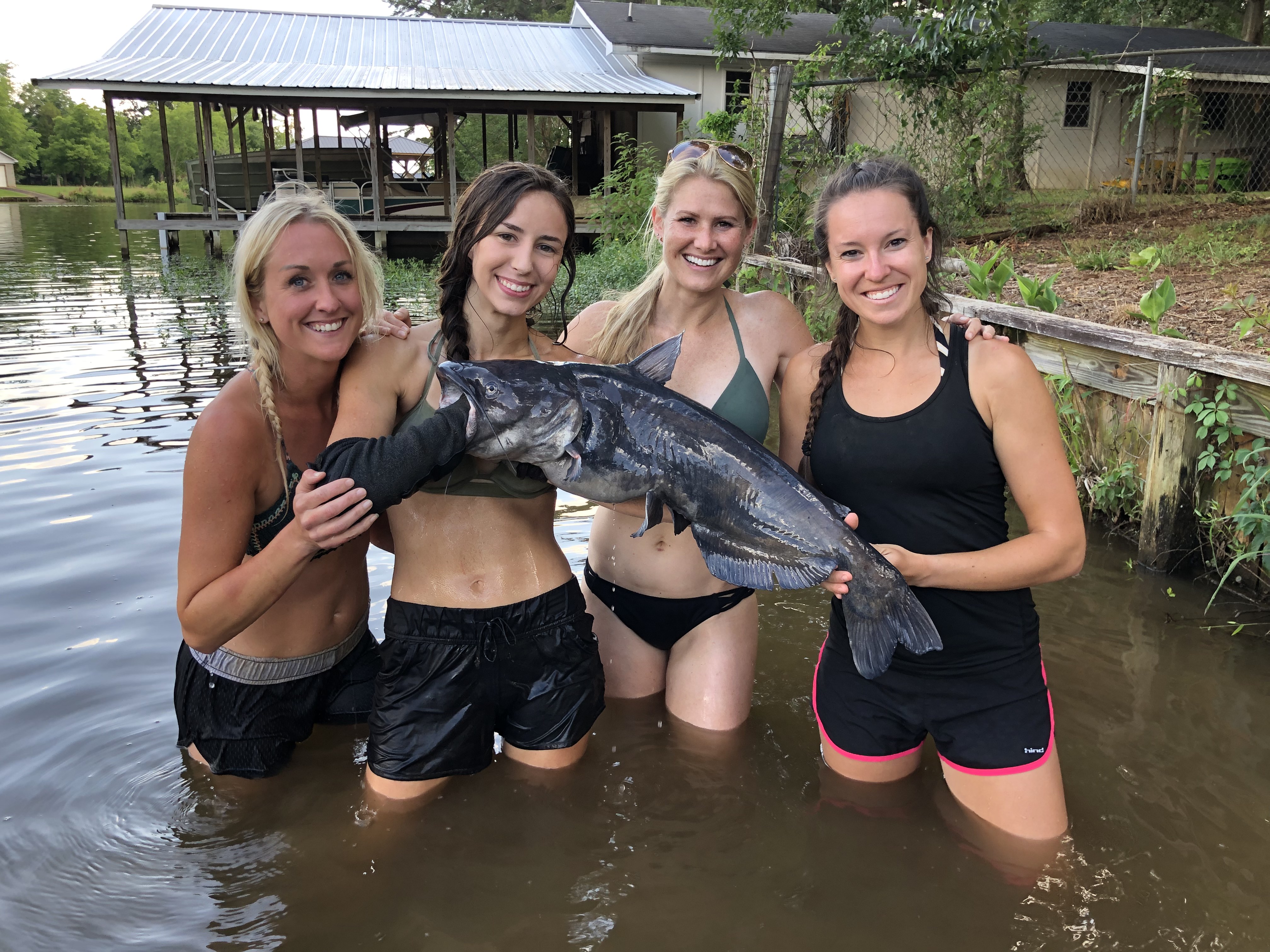 Catfish noodling has a myriad of alternative names: grabbling, hand fishing, hogging, etc. The premise is to extract a catfish from its underwater hole. These holes are usually underneath structures: think boat ramps, rocks, tree trunks, concrete walls, etc. Upon locating a hole, noodlers stick their hand in the hole with the goal of being bit by a catfish. “The reason that catfish bite you is they are protecting their nest,” Alyssa explains. Since her first catfish noodling experience, she estimates she’s been noodling at least one hundred times.

What was that first experience? Alyssa credits her fiancé, Cody Hall, for that one. “He told me that catfish loved bedding under boat ramps, so we went to the lake right by my parents’ house, and he let me pick out all of the ramps that we went to. That day, Cody caught his biggest flathead and his biggest blue cat. I didn’t catch anything. I just picked out ramps, felt for holes, watched him, learned how to properly hold the fish by practicing with the ones that he caught, and loved every minute of it. I like to think I was just a good luck charm that trip…either way, it was a trip that we still talk about because it was so much fun.” And after you’ve caught one: “It is always best to release catfish back into their bed after you get a few pictures with them, so that they can finish spawning.” 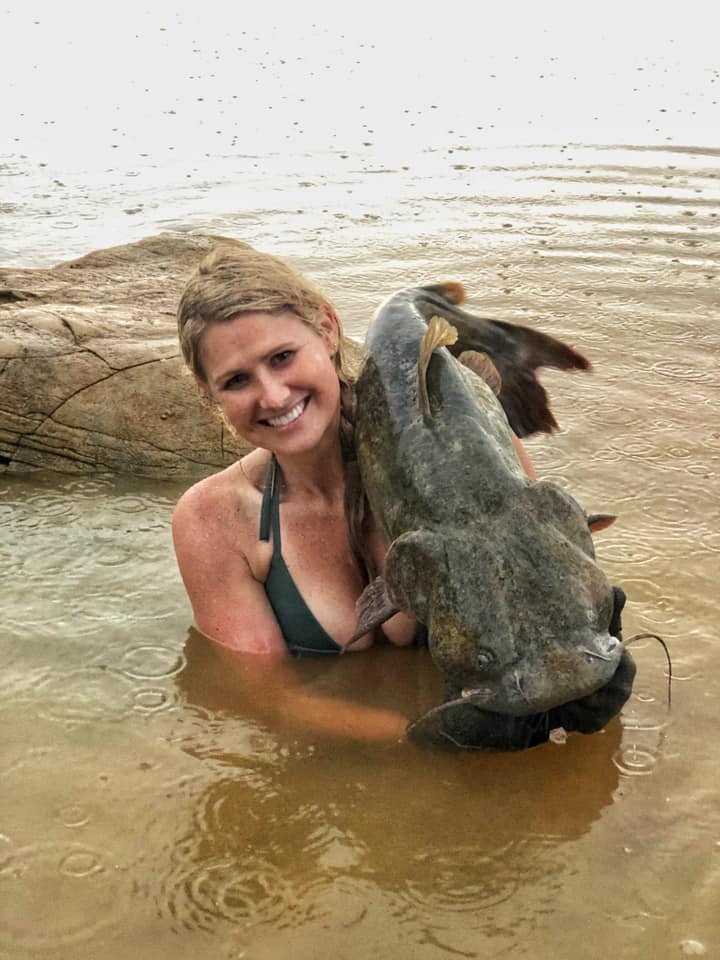 Brittany describes her initial notions going into her first experience: “I went in thinking that, basically, you stick your arm in and you get bit. That’s not how it goes. You stick your arm in, you’re underwater and you’re going, ok, do I have enough air that if I would get bit I’d be okay or do I need to come up and get more air? Sometimes it takes like ten tries.” As outdoor women, are we surprised that this activity takes patience as well?

For other first timers, Alyssa offers the following tips:

“When you get there, you change your mind real quick!” Rachelle recalls. Alyssa can relate, saying: “Your common sense starts to scream ‘What in the world are you doing woman?!’ Don’t let it trick you into thinking that you’re about to lose a finger, drown or be eaten by a whale…it’s just a catfish.” They all promise, it gets less nerve-wracking after your first time.

On this outing, Allison was chosen to go first. "I stuck my arm all the way in the hold and the blue cat bit me really hard and fast. He drew blood through the gloves I was wearing. I dove back under and ended up getting bit about three more times before I managed to grab the fish by it's bottom lip and pull it out with help from the guide. It was an experience I will never ever forget and I've been addicted ever since." 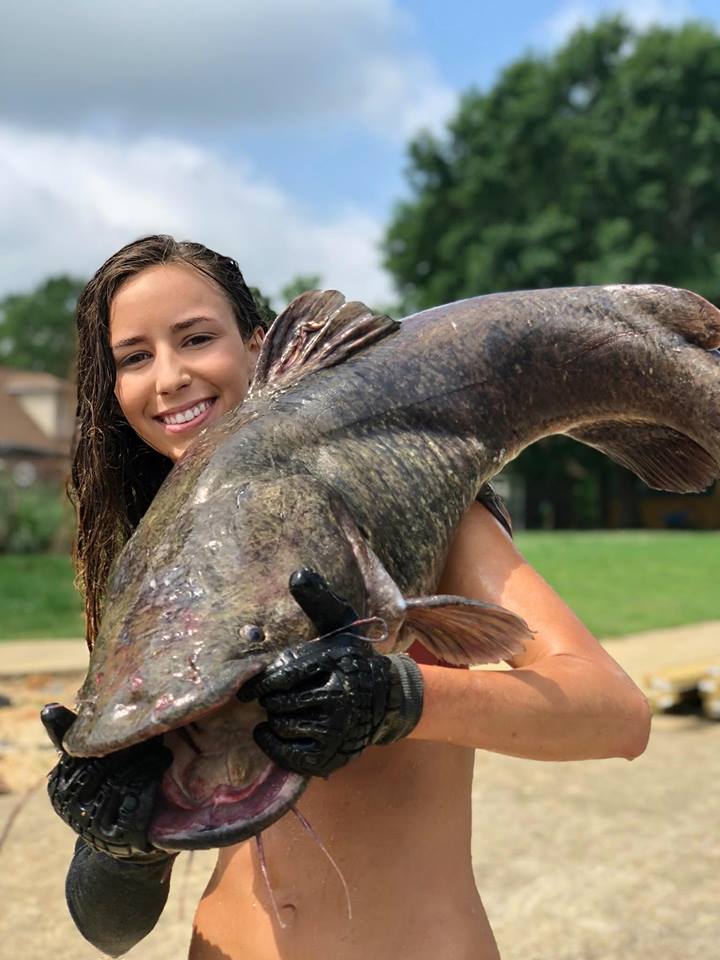 The biggest misconception among beginners is that a snake, alligator or snapping turtle will be occupying a catfish hole. But Alyssa promises, “If you’re in a catfish nest, you won’t find those things. If you do, you’re in a beaver hut, not a catfish nest.” Still, the human mind can play its tricks. Rachelle says, for piece of mind, “a lot of people will stick a stick in first, let it bite the stick and go ‘ok, there’s a catfish in there.’ If you know there’s a catfish in there, you won’t be thinking that there’s something else in that hole.”

After this experience, all of the women see more catfish noodling experiences in their futures. As Allison puts it: "It's a challenge to yourself. To overcome your fears and do it anyway gibes you such a sense of pride and exhilaration. It's addicting." We love to see the DSG ambassadors getting out to Do Something Great. Now it’s your turn! Try something new today, and tag @dsghunting on all your outdoor adventures.